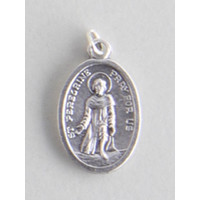 Patron of Cancer and Running Sores

Peregrine Laziosi came from a wealthy family that supported the anti-papal faction in Northern Italy.  As an18 year old Peregrine heckled and struck St. Philil Benizi the Prior General who was sent to reconcile the divided community. Peregrine later repented and asked Philip for forgiveness. Having been received by Philip with kindness Peregrine began to turn his energies to good, later being ordained as a priest.

He was known for his preaching, penances, and counsel as well as his devotion to the sick and the poor. He was known as the “Angel of Good Counsel”.

Later in his life he developed a severe infection in his leg and his Doctor decided to amputate the leg. The night prior to the surgery Peregrine spent time praying and received a vision of Christ on the cross reaching out to touch his leg. The next day the Doctor could find no trace of the infection. News of the miraculous cure further increased people’s regard for Peregrine.

Select Afterpay as your payment method

Use your existing debit or credit card

Complete your checkout in seconds

All your need is:

1) An Australian Visa or Mastercard debit/credit card; 2) To be over 18 years of age; 3) To live in Australia

We are open and operational during the COVID-19 crisis.

Please refer to the COVID-19 page for more information..